is 50 and Celebrates Golden Jubilee

By Moki S. Mokondo and Otto Enyame (Some pictures) in Limbe for Fako UK/Fako News Centre 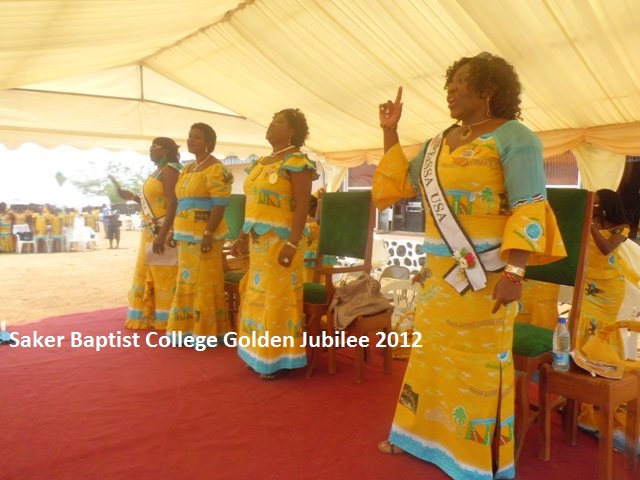 Ex-students of Saker Baptist College, Limbe, popularly known as Sakerettes, came in their colours and numbers from all the corners of the world and joined their alma mater to celebrate the school’s Golden Jubilee. Events marking celebrations of the school's 50 years of existence included traditional dances, a fashion show and singing. The events started from the 26th of January and ended on Sunday January 29th 2012 at the campus of the school. In the process, they transformed the streets of Limbe into gold. 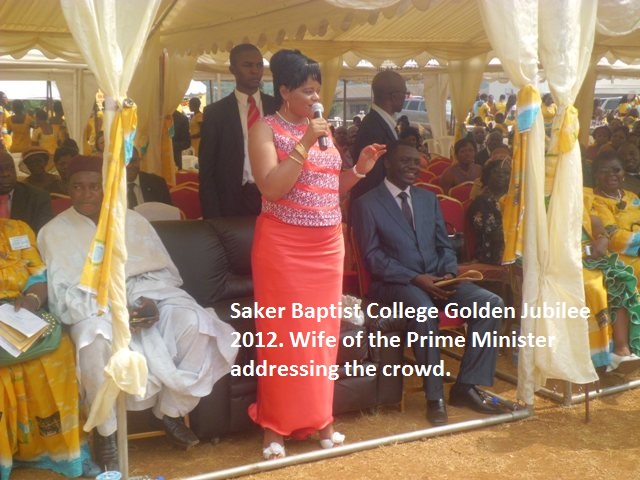 Saker Baptist College, Limbe, one of the best schools in Cameroon, and its ex-students called Sakerettes, who are good at attracting the most intelligent men, staged a jubilee that no other school in Cameroon can match. When Sakerettes are around, the heavens open with splendour and majesty. It was the best environment that any man or woman, Sakerette or non Sakerette, would want to be in. Any body who had under-estimated what Saker Baptist College and its ex-students would stage as Golden jubilee would have been shocked. Sakerettes have transformed the name Saker into the most glamorous and attractive name in Cameroon and Cameroonian communities all over the world. It doesn’t matter how many ‘O’ levels each Sakerette had, it doesn’t matter how many years each Sakerette spent in Saker, but there are two things common to all Sakerettes; they are intelligent and beautiful. 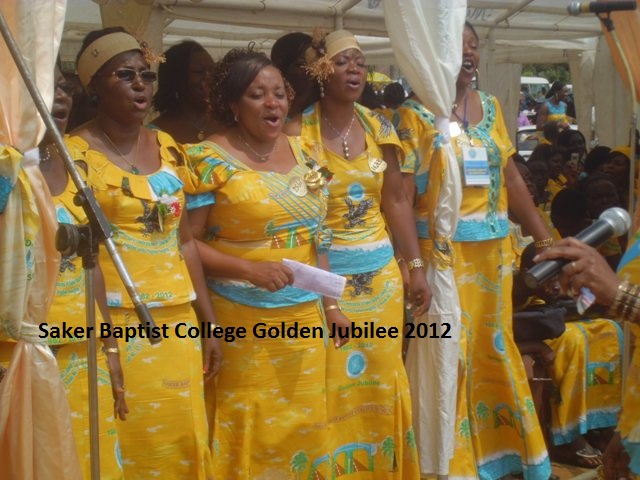 The excitement and euphoria of renewing old acquaintances after several years characterised the atmosphere of the Golden Jubilee. Despite the fact that most of the former students have grown-up into responsible motherhoods, they could not hold back themselves from shouting and running from one end of the assembly ground to the other just to embrace an old friend like they would do when they were still small innocent teenagers. Thanks to this event, many EXSSANS (Sakerettes) had the opportunity to meet and share memories of the good old days as students. 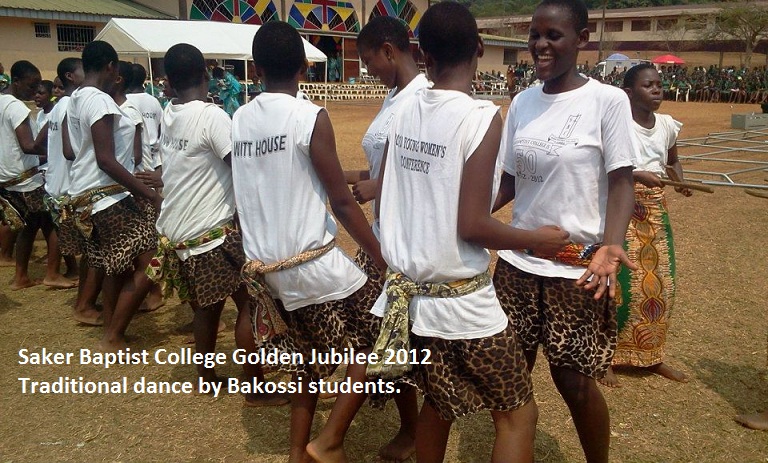 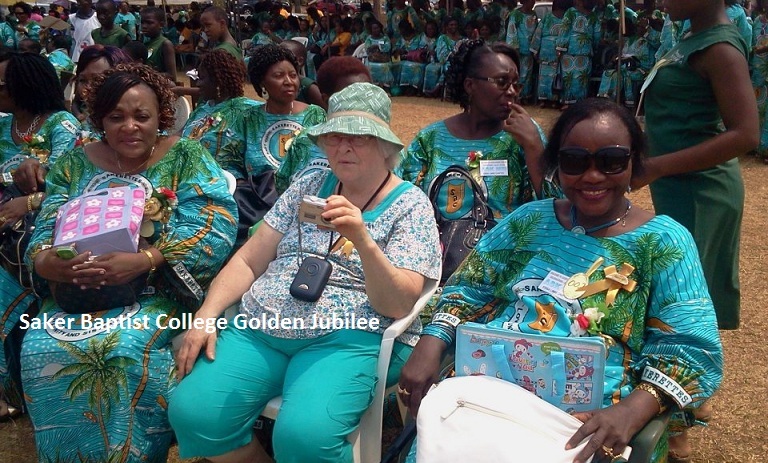 On his part, the CBC Education Secretary and former Principal of Saker Baptist College, Paul Luma Haddison, disclosed that the college was the first independent venture of CBC into secondary education. He added that the idea of the founding fathers of this institution was dedicated in educating young girls into professionals and responsible parents who would be academically, physically and morally acceptable in the society for the economic development of their communities. That is why in addition to the regular academic subjects, the college administration laid extra emphasis on domestic sciences and music. 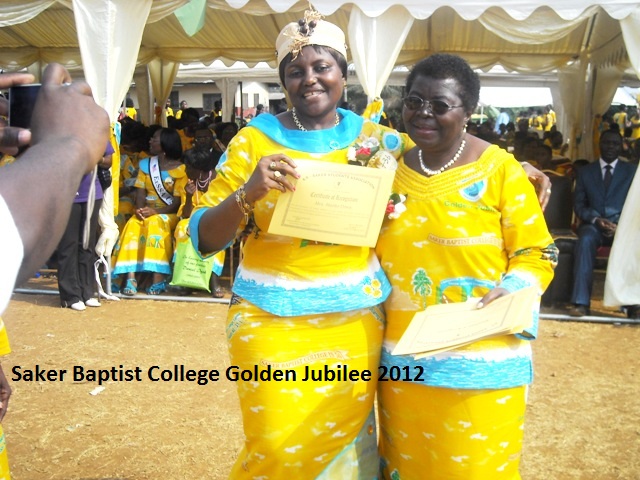 The institution began rudimentarily with the bathroom constructed by the girls themselves using palm fronds, a small dormitory house of 4 bedrooms and 12 bunk beds. Today, the institution has permanent structures with modern boarding and learning facilities. Thanks to the support from former students of the school, the school can now boost of a modern chapel. EXSSANS are currently mobilising funds to realise a dormitory for the school. Saker Baptist College and Sakerettes will always make headlines in Cameroon and beyond. 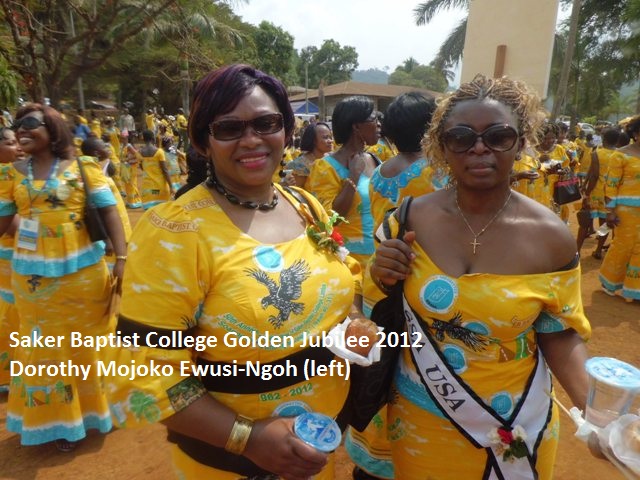 Talking to an EXSSAN from the United States of America,  Dora Mojoko Ewusi-Ngoh, she recounted the following:
Well !! I will like by stating how it happened that I attended Saker Baptist College. My older Sister Christy Ewusi Attere had attended Saker Baptist College and graduated in 1969. This was also the class from which a group of students including some boys from the then BTTC in Buea were selected to form The College Singers from Cameroon-The first group of students who toured the United States of America in Choral concert.
I was in Class four in primary school at the time and told my mother that I would also love to attend Saker. She laughed and responded that there were many years ahead during which I could change or finally make up my mind. Since I loved singing as a child, in my mind I knew that this might be my own opportunity to go to America.
When the results of the common entrance exam into secondary schools came out in 1972, I dashed to the Education Office to view my results. I went home crying because I had passed in list “A” and was scared that that would translate to me being sent to the only only Government Bilingual College in Yaounde at the time. That meant my hopes to go to Saker had been dashed. I was crying so hard my mother thought that I had failed the exams. When I explained my plight to her, she consoled me and stated that I would go to Saker so long as I passed the interview which I did.
In September of 1972, there were Seventy eight of us who climbed the Saker Hill as form one students. It would seem as if every member of this particular class was hand-picked by God . I say this because we blended so well in many respects. We were all good together and mischievous together. 1972 was also the year that saw the administration of Saker by the first Black Principal. To us it was a transition that signified our class as being special.
I graduated in 1977 after successfully passing the GCE “O” levels. I must indicate that we were also the first Cameroonian batch to write the Cameroon GCE.
My experience in Saker is etched deeply in my memory. I owe so much of what I am today not only from the academic but the spiritual and moral upbringing that Saker instilled in me. For those that know Miss Binder who was Vice Principal for many years-She is a no-nonsense woman who would not allow us to receive visitors or letters from those not in the list signed by our parents. Of course we got into so much trouble when we received such letters. Miss Binder knew us all by face and name to the extent where she would call you by name even from behind. When it was time for my daughter to attend secondary school, I did not even have two choices in mind. She is the class of 2000.
I have been a part of the Saker Family wherever I have been. Our reunions are always great and fulfilling in that the ties that bind us are very solid. ExSSANS demonstrate a lot of Love Care and Concern for each other as reflected in our motto: Love Unity and Sisterhood. There is no Ex-Student of Saker who can be stranded  in any form of need anywhere in the world where there are Sakerettes and would not be rescued or get help. If I would elaborate on that, I will be writing a book because the testimonies are countless.
Back to your question I would like to say it was indeed a surreal experience coming back to Saker after 35 years for the Golden Jubilee Celebrations. I felt chills even in the hot climate of Limbe. I could not have missed this opportunity for anything in the world and I thank God for making me see this event.
I met friends that I had not seen since we graduated, yet it also felt as if we have always been together, There were tears, screams, laughter, smiles, hugs and what not? Some former teachers were there not to talk of our famous Miss Binder. There was Love, respect, courtesy and friendship in abundance. During the celebrations members of my class of 1977 were also in/out of the campus to support one of ours who was bereaved as some completely missed the occasion to stand by her, and accompany her to the village to lay her loved one to rest. That is the spirit I am talking about!!
The spiritual messages I took home will continue to guide the path that I tread upon. From Dr. Stella Anyangwe: “It is the end that matters”. From Rev. Esther Gadpaille” Claim your Jubilee, it is your Lord”.
I feel a new spirit within me, I am overwhelmed with joy and gratitude to Saker College and I will forever bear that torch flaming bright.
Our convention theme” They Shall Mount up with wings like eagles” Isaiah 40-31.
Long Live Saker Baptist College. Long Live ExSSA.