Prizes To Students, And The Principal Bids Farewell To Staff and 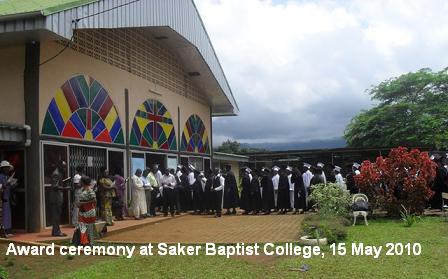 The Saker Baptist College Annual Awards Ceremony took place on Saturday the 15th May 2010. It was attended by special guest speaker Mrs Lois Ikome, an ex-student of the school. Mrs Ikome captivated the audience with her inspirational speech under the theme ‘Women of Virtues’ in which she cautioned the students against falling standards of the world. According to Mrs Ikome, the dishonest nature of the world today now makes people to take vices for virtues. The ex-student told the students to be prudent and guide against counterfeits, for all that glitter is not gold, she stated.  Drawing a quotation from the book of Proverbs Chapter 31:10, she explained that although women of virtues are rare, they can still stand out if they follow the moral guidelines; kindness, faithfulness, love, honesty, self-control, patience, etc which are the fruits of the spirit. 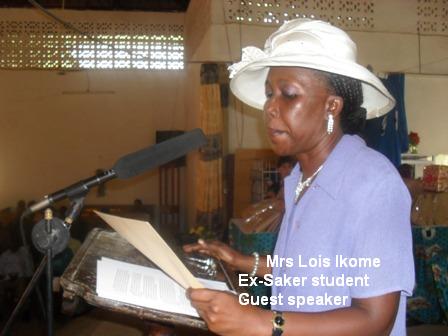 Mrs. Ikome continued that, until their lives ripple a positive influence in their communities then can they boost of their talents and education. While calling on them to remain pace setters in the society, she advised them to be responsible and check against the freedom they would have after leaving Saker Baptist College, Limbe. 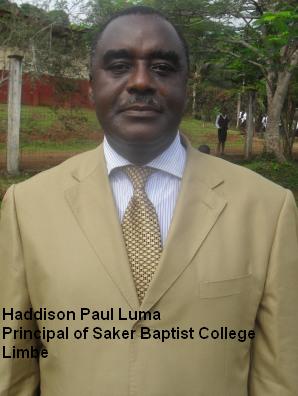 The Principal, Mr Haddison Paul Luma, who was appointed Baptist Education Secretary for the South West and North West regions of Cameroon in December 2009 and also remained as principal till the end of the academic year, gave an overview of the academic year highlighting academic and extra-curricular achievements that contribute to the life of the school. He called on the students of the examination classes to strictly follow the guiding principles the school authorities have given. While biding farewell to the students, he prayed them to stay focused, avoid any distraction and be determined to get better results. In last year’s GCE results, Saker Baptist College was the school with a one hundred per cent pass rate that had the highest number of exam entries at the ‘O’ Levels in Cameroon. The students achieved a total of 238 ‘A’ grades, making it one of the centres of highest academic excellence. 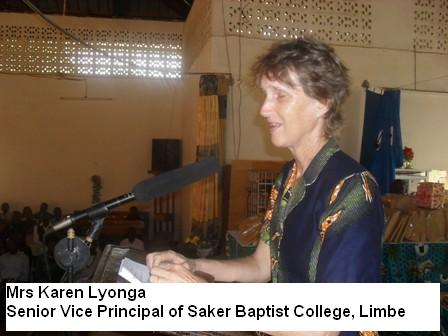 More importantly, the school’s results represented a high degree of added value. In other words, students of Saker Baptist College made excellent progress from when they joined the school in ‘form one’ until they left in ‘form five’ or ‘upper sixth’. 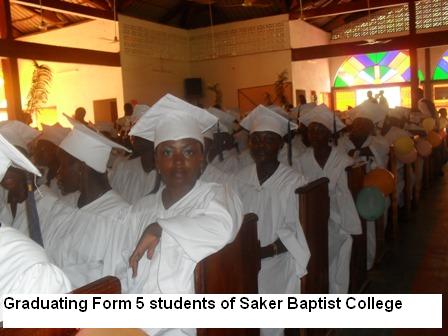 Mr. Haddison-Luma disclosed that the school experienced God’s blessings this school year as they where able to realise projects like the construction of water system toilets, new dormitories, a water tank and the purchase of new computers thanks to the PTA. 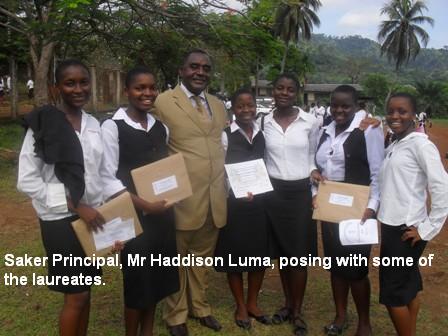 Saker Baptist College provides something more than academic success alone. Parents have certainly been impressed by the breadth of activities at the school which provide opportunities for students to grow spiritually, physically and culturally. School governors are very grateful to parents and EX-SAKER  groups all over the world for supporting the school in its efforts to provide the best possible education for all students. They are also very appreciative of staff who continue to work beyond the call of duty for the benefit of the students. 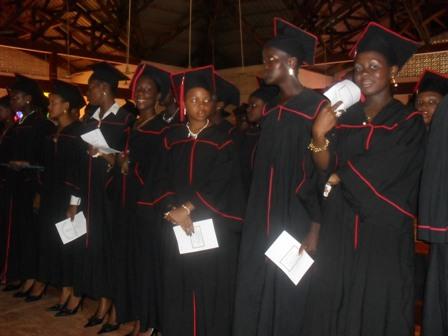 Many students received subject and other awards for their effort and progress in subject areas across all the forms (forms 1 to upper sixth). The star of the day was Veronica Ebenye Njie of Lower Sixth class, who received an award of 100,000 frs from the Bakweri community in Great Britain (FAKO UK) for having the best Bakweri student GCE results in Cameroon in 2009 (passed in 11 subjects : Grades 9A, 1B, 1C), shared a 250,000 frs ‘Maloke Efimba scholarship’ with another student, and won the first prize for Biology. 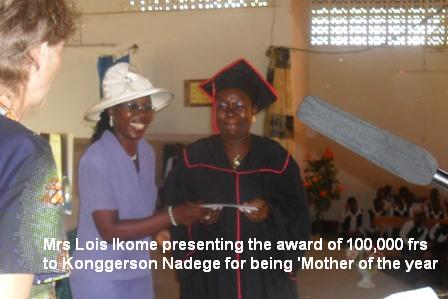 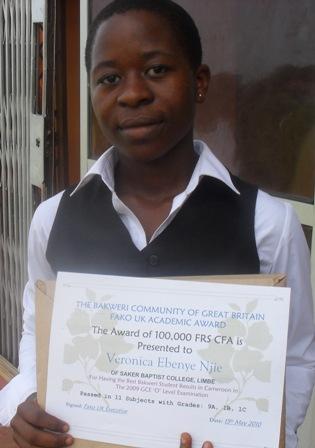 Konggerson Nadege of Upper Sixth class won an interesting prize: she won a prize of 100,000 frs for being the most caring student of the year (Mother Of The Year). The prize was donated by a woman living in America, whose daughter had schooled at Saker Baptist College. 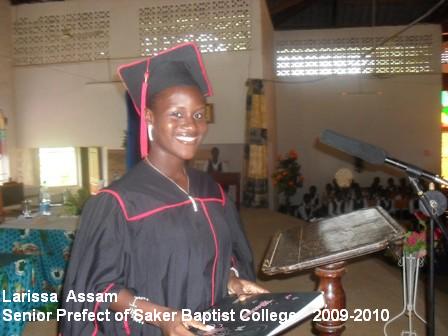 During her valedictory address, the outgoing senior prefect, Larissa Assam, recounted their experience in the school from day one. Miss Assam stated that it was a priceless one as the bells, shouts from the administration and punishments whenever they went wrong have only combined to mould them to women of virtues. She thanked the school authorities and her mates for giving her the opportunity to test her leadership skills. 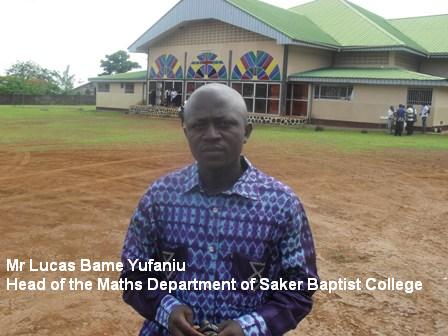 Commenting on Saker Baptist College’s brilliant performances in  GCE examinations especially in Mathematics, the Head of Department of Mathematics, Lucas Bame Yufaniu, explained that all is due to hard work on the part of the teachers and students. Mr Bame disclosed that the teachers have been trained to be devoted and are always in class. 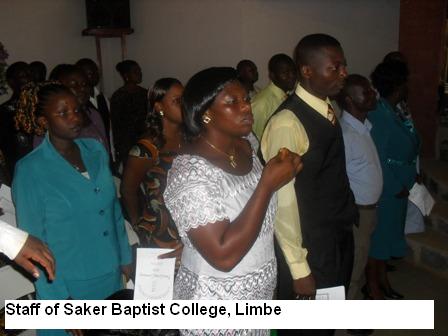 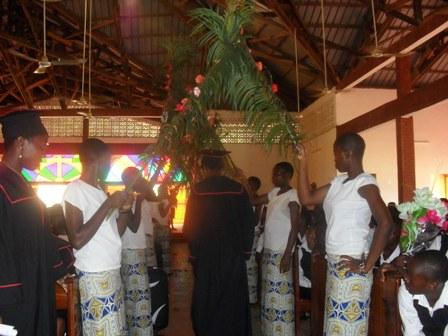 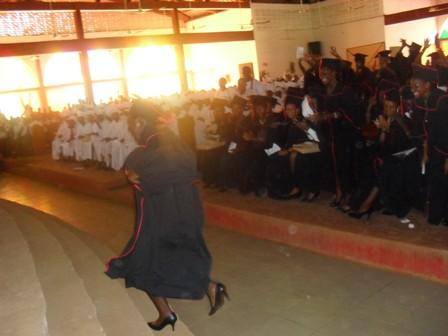