The  Honourable Emmanuel Mbella Lifafa Endeley, son of Fako Division in Cameroon, was the first intellectual in Anglophone Cameroon and the greatest Cameroonian politician of all time.

After his death on 29 June 1988, at the age of 72, a then young newspaper reporter Peterkins Tengileli Elive also of Fako origin, researched on Dr Endeley’s life and wrote a tribute which was published in a local newspaper on 29 July 1988.

FAKO NEWS CENTRE has the pleasure of producing this tribute as published in 1988, for the benefit of the Cameroonian public and the rest of the world.

THE LATE DR E.M.L  ENDELEY: TRIBUTE TO A GREAT STATESMAN 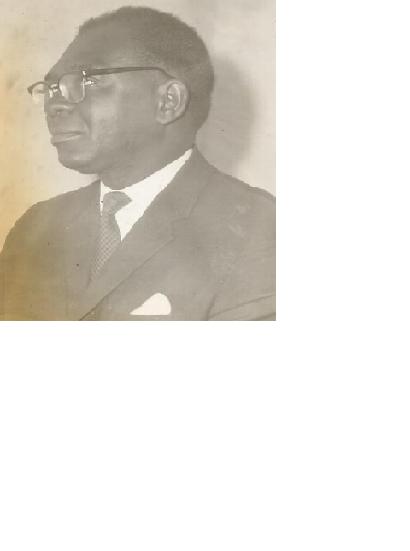 The thousands of people who thronged the residence of Dr Emmanuel Mbella Lifafa Endeley to pay him their last respects and escort him to his final place of rest 29 June- 2 July, 1988, did not do this simply because a Central Committee member of the C.P.D.M had died. They came to pay their last honour to one of the pioneers of Cameroon’s independence whose  biography occupies an invaluable place in the history of Cameroon.

When Maria Mojoko mo Liombe gave birth to a son on 10 April 1916, little did she and her husband Chief Mathias Lifafa Endeley know that their child, Prince Emmanuel Endeley, was destined to become one of the most heroic figures in Anglophone Cameroon. After studying at R.C.M School(Roman Catholic Mission) Bonjongo and the native authority(now Government) school Buea Town, the young prince proceeded to Government College Umuahia, Eastern Nigeria, in 1931. He did his High School education at the Yaba Higher College in Lagos, and finally entered the Nigeria School of Medicine from where he graduated in 1943 as a medical doctor specialising in surgery. After serving as a medical doctor in Port Harcourt, Lagos and Buea, Dr Endeley was overwhelmed with the prime need of the time and switched over to politics to champion the course of a bright political future for Southern Cameroons.

As we already know, German Kamerun had been divided up between Britain and France at the end of world war I as mandated territories under the League of Nations. After the replacement of the League of Nations with the United Nations Organisation following world war II, the Trusteeship Council became responsible for the administration of the Old Mandated Territories. For administrative convenience, British Cameroons was divided into two portions- a northern portion which was administered as part of Northern Nigeria, and a Southern portion which was administered as part of Southern Nigeria. Under this arrangement the Cameroons became part and parcel of  the Federation of Nigeria. Such was the situation when Dr Endeley entered politics.

In 1949, Dr Endeley formed the  Cameroon National Federation, a pressure group which became instrumental in spotlighting Cameroonian aspirations. The same year(1949), Dr Endeley represented the Trust Territory of the Cameroons at the Ibadan conference and in 1951, in accordance with the terms contained in the Macpherson constitution drawn up at the conference, Endeley and twelve other Cameroonians were elected to the Lagos House of Representatives and the House of Assembly in Enugu. Dr Endeley was also appointed Minister of Labour in the Council of Ministers in Lagos thereby becoming the first Southern Cameroonian Minister, along with Mr S.T Muna who also became Minister of Works in the Eastern Regional Executive, Enugu.

Through Dr Endeley’s relentless efforts to improve the status of the territory, regional autonomy was granted to Southern Cameroons and on 15 May 1958, the first ministerial government was formed with Endeley as Premier and Minister of Local Government, Lands and Survey. 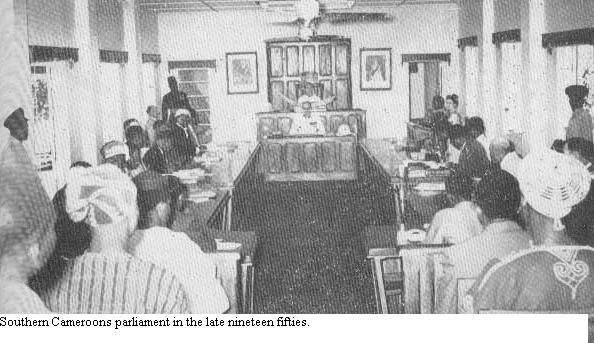 It was during Dr Endeley’s Premiership that the ministerial block in Buea that now houses the South West delegations of Education and Youth and Sports was built. At this time, the three main political parties in Southern Cameroons were Dr Endeley’s KNC, John Ngu Foncha’s Kamerun People’s Democratic Party(KNDP) and Paul Monyongo mo Kale’s Kamerun People’s Party(KPP). Foncha had in 1955 quit the KNC and formed the KNDP to fight for the unification of Southern Cameroons with French Cameroons and P.M Kale had also formed the KPP in order to make parliamentary democracy a reality in Southern Cameroons.

While Foncha’s KNDP stood for the unification of all parts of German Cameroon, Endeley’s KNC opted for an autonomous Southern Cameroons in the Nigerian Federation. Meanwhile, Northern Cameroons had made it quite clear in 1951 that she would remain permanently as part of Nigeria and had since then lived as such.  It so happened that when elections into the Southern Cameroons House of Assembly for 26 seats were held on 24 January 1959, the KNDP won 14, the KNC won 8 and the KPP won 4. Consequently, John Ngu Foncha, President of KNDP, became Prime Minister of Southern Cameroons. When Mr J.N Boja, the KNDP parliamentarian for Wum,’crossed the carpet’ and defected to Endeley’s KNC, and the KNC merged with P.M Kale’s KPP to form the Cameroon People’s National Congress(CPNC), representation in parliament stood at 13-13. However, despite the delicate position in which the KNDP now found itself, Foncha still formed the Southern Cameroons government 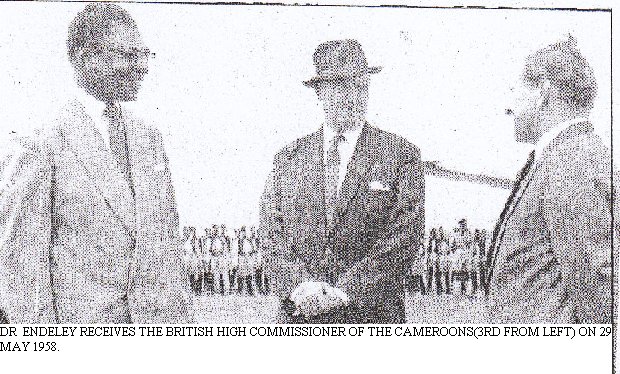 As the independence of Nigeria and French Cameroons drew near, the question of the Cameroons became the concern of the United Nations. Thus the General Assembly of the UN resolved that the people must be given the right of self-determination and 11 February 1961 was fixed as the date for a plebiscite in which the Northern Cameroons and Southern Cameroons would decide whether to merge with Nigeria or the French Cameroons.

Nigeria offered that should Southern Cameroons elect to merge with her, she would be given full regional status with Governor, Premier, Legislature, Executive Council, Ministers, etc. On her part, French Cameroon offered a separate House of Assembly and a Federal Court of Justice. While Endeley and Foncha canvassed for their respective stands, P.M Kale who had formed a new party called the Kamerun United Party, Stephen Nyenti of Mamfe who was leader of the Cameroon Commoner’s Party and Jesco Manga Williams of the Kamerun’s People’s party, opted for an independent Southern Cameroons which would neither join Nigeria nor French Cameroons. Since their option was not included in the terms by the United Nations, they urged their supporters to abstain from voting or deface the ballot paper to express their wish.

After staying under British rule for 42 years, Southern Cameroons joined the Republic of Cameroon on 1 October 1961 and after a conference at Foumban to draw up a constitution, the various parties agreed to set up a Federal Government with two states namely, East Cameroon(the former French Cameroons) and West Cameroon(the former British Cameroons). Thus two peoples with fundamentally different languages and cultures came to live under one umbrella.

The Foumban  constitution, whose provisions were greatly influenced by Dr Endeley who wanted security for the minority English-speaking population, gave West Cameroon self-government with a House of Chiefs, House of Assembly and Ministers, all of whom were Anglophones, thereby giving West Cameroonians full domestic independence. The central government in Yaounde was only in charge of Foreign Affairs and defence.

Dr Endeley, leader of CPNC became Leader of Opposition in the West Cameroon House of Assembly till 1966 when the CNU was formed from a merger of all Cameroonian political parties. Dr Endeley still remained in parliament till 1972 when the 20th May referendum deprived West Cameroon of her domestic independence in preference to a centralised government in a Unitary State. In 1973, Dr Endeley was elected to the National Assembly in Yaounde where he stayed till 1988 when he retired from active politics. From the foregoing, one would realise that Dr Endeley’s biography is the history of a nation.

WHAT HE ALSO ACHIEVED IN HIS LIFE-TIME

In his life-time he also formed the first Trade Union for CDC workers of which he became Secretary and after, President. Between 1953 and 1958, he was president of the Bakweri Co-operative Union of Farmers(B.C.U.F), the largest and most well-administered indigenous society of farmers in Anglophone Cameroon. It specialised in bananas and played a great role in improving the standard of living of many Bakwerians.

Dr Endeley was president of the South West Farmers’ Co-operative Union(SOWEFCU) between 1979 and 1985, and for many years was the CNU and later CPDM Fako Section President.  His contribution to the economic, social and political evolution of this nation is beyond praise. He so loved his people that he gave up his very lucrative medical profession to fight for an international identity for English-speaking Cameroonians. He will remain on the minds of all right-thinking Cameroonians as one of the most hardworking, fearless and courageous politician this country has ever known. He always said NO when he had to and bravely refused to clap for those things he knew would not benefit his people. His unrivalled ability to adapt to the waves of fate and destiny made him to live an unperturbed life in diverse capacities at various periods. He accepted defeat whenever it came but still defended his views tenaciously without injuring anyone or trying to reverse by violent means, the decision of the majority. Although Anglophone Cameroonians finally found themselves at the extreme of the opposite direction of what the great man of foresight and vision had envisaged for his people, he still lived with them to preserve peace and avoid bloodshed.

May his soul rest in peace.