To Run To Hut 3 and Back, Instead of Running to The 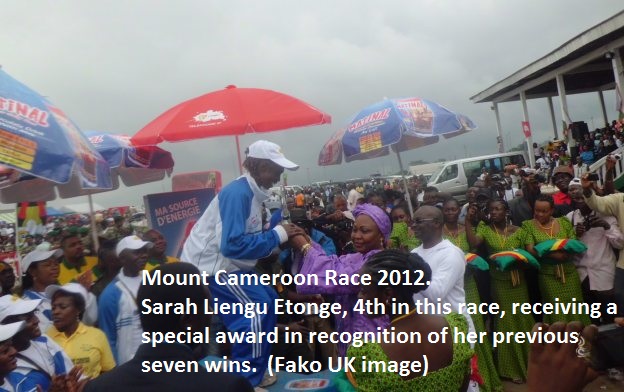 For the first time since 1973 when Mount Cameroon race started, athletes did not run beyond Hut 3 of the Fako mountain as very heavy rain caused officials and guards at the shelterless summit of the mountain to retreat to Hut 3 for shelter. Journalists stationed at the summit (turning point of the race) announced on radio that all officials of the race left their station to relocate at Hut 3 since there are no shelter facilities at that point of the mountain. Apart of the senior male and female categories of the individual and relay runners who ended at Hut 3, all other categories ended at hut 1.  The finishing times of all athletes in this year’s edition of the race will not be compared with the finishing times in previous races because athletes did not run to the summit this year. Hence, no finishing time record was broken. 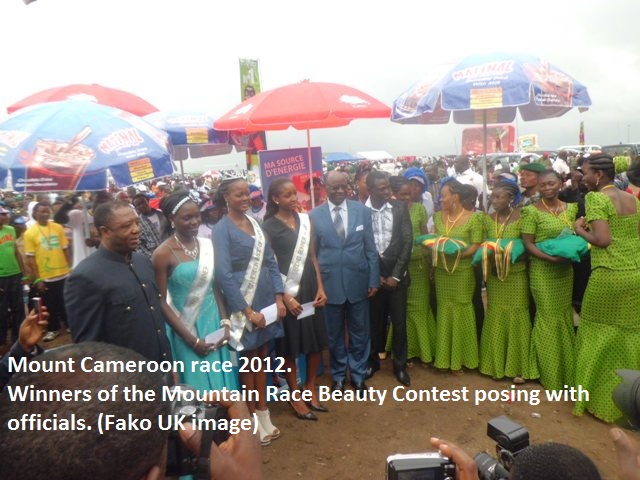 Despite the bad weather, athletes of the 17th edition of the Mount Cameroon Race of Hope were not discouraged but went forward to take the risk to challenge Mount Cameroon in one of Africa’s toughest foot races. Out of over 700 runners who grabbed the bull by-the-horn to ascend Mount Cameroon in various categories of the race, many of them failed to complete the race due to the poor climatic conditions.
Notwithstanding the numerous challenges like the steep-rocky-volcanic slopes, bad weather leading to poor visibility among others, champions still emerged by the end of the race. This years edition that saw the introduction of the category for the blinds and female relay race, was animated by the come-back of seven-time female champion and Queen of Mount Cameroon, Sarah Liengu Etonge. The arrival of Sarah Liengu Etonge witnessed a standing ovation from Upper-Farms when she emerged from the forest to the end-point at the Molyko stadium. Though the mother of 7 completed the race in 4th position for the female senior category, one would have mistaken her for the overall champion of the race. The young and the old all ran alongside her to encourage her cross the finishing line.
Sarah Etonge, who last participated in the race in 2008 after winning several goal medals and trophies, was a happy woman given that one of her trainees, Boyo Confidence, finished in 2nd position in the female senior category. Sarah Etonge's daughter Sophie Namondo’s relay team finished 3rd.  Considering her show of power, passion and determination in participating in the race, the organisation of the race presented a special trophy to her with an un-announced sum of money. The Minister of Sport and Physical Education has also laid the foundation stone and given orders for the construction of a retirement home for the Queen of Mount Cameroon. One of the sons of Fako who has come closer several times to being among the first 3 in the race, Lyonga William Mondoa, moved from last year’s 4th position to the sixth. Yet, his kinsmen were very happy to encourage him cross the finishing line. 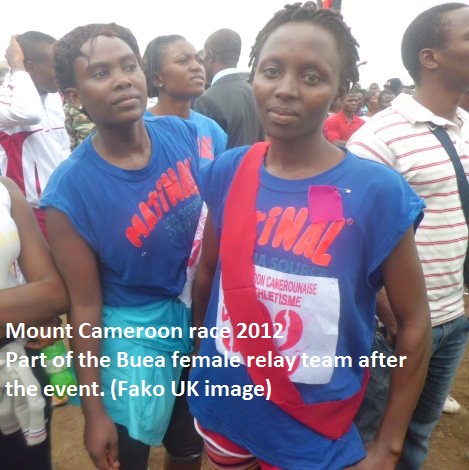 There was also a Beauty Queen Contest that took place on the eve of the event. The participants were not only rated based on their physical beauty but were also tested on general knowledge and awareness on tourism. At the end of the exercise, a student from the University of Buea, Afor Teni, won the show. The 1st runner-up was a student from The St. Francis School of Nursing and Midwifery, called Eposi. While the 2nd runner-up was Ayuk Cecilia all aged 21.
List of main winners of the race
Senior Male Category
1st – Godlove Gapsibuin- 4hrs 2ms
2nd –Simplice Ndongeh- 4hrs 9ms
3rd – Tiku Divine              - 4hrs 10ms
Senior Female Category
1st Ngwaya Yvonne – 4hrs 59ms
2nd – Boyo Confidence – 5hrs 10ms
3rd – Ngalim Lizette – 5hrs 2ms 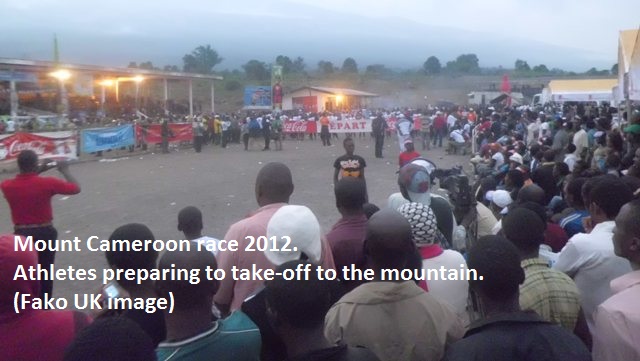 One Bakweri native, Joseph Ngembo of Ewonda village in Buea, and other members who were hired as strong men of the Fako mountain, only returned from the mountain the day after because they had to rescue an athlete who could not walk after reaching Hut 3. It took these strong men  more than a day to bring this athlete back to Buea town.

YOU CAN CLICK HERE FOR THE LIST OF ALL PREVIOUS WINNERS, MEN AND WOMEN CATEGORIES, OF MOUNT CAMEROON RACES.